ARMY CAMP OF ARTS
Si-luo, Taiwan
Si-luo(西螺) is an old farming and business town near the western middle of the island of Taiwan.

The camp dates from the 1940's. There were 43 soldiers stationed at the camp to protect the famous Si-luo Bridge...the long bridge spanning the Zou-sue River. (The name of the river means "muddy" and describes the "dirty" water coming down from the central mountains in the river. This "dirt" is deposited along the river creating rich farm land in this area.) This is the longest river from the mountains to the sea in all of western Taiwan.

The base for the bridge was built by the Japanese government before WeII but not completed. After the war, the new government of Taiwan did not have the resources to complete the bridge so the USA helped. The USA sent the designer of the famous Golden Gate Bridge in San Francisco, California, USA, to work with the Taiwanese. The bridge was completed by Taiwanese labor and is now a famous landmark. At the time it was the longest bridge in Asia including Japan, Philippines, etc.


As the country developed, more and more direct road and rail links were built, making the bridge less critical and important. It no longer needed military protection as the "main" link. It was at this time, in the 1970s, that the army camp was abandoned.
In 2005, an artist, who was a native from this town, returned to find an abandoned army camp.
The artist invited his friends and any interested local people to join him in cleaning up and re-discovering the camp. Fortunately, the government of Si-luo town became interested and began to help with the first big cleaning effort.

The clean up effort attracted a lot of local interest and the artist and a group of supporters set up an art association: Si-tuo Art Association(雲林縣西拓藝術協會). Si-tuo means "western reclamation". The Association with the permission of the town government took over the Army Base as its home and the center of its projects. Now the camp is known as: The Army Camp of Arts. Thus, an abandoned place has taken on a new life.

Thereafter, the Si-tuo group decided to shift its focus to environmental and earth-friendly work and art.

With all of this varied and stimulating activity, the Army Camp of Arts has become a home to many and is a utopia...an "ideal" separated from the ordinary stresses of daily life. 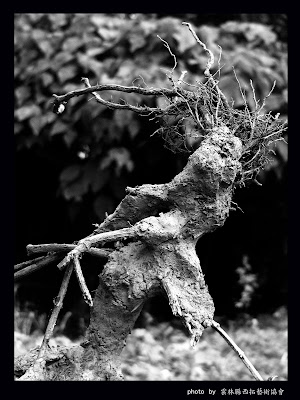